After trailing by as many as 23 points, the Hornets defeated the Pacers, 123-122. LaMelo Ball recorded 31 points, nine rebounds and seven assists for the Hornets, while Domantas Sabonis tallied 33 poi
Tweet 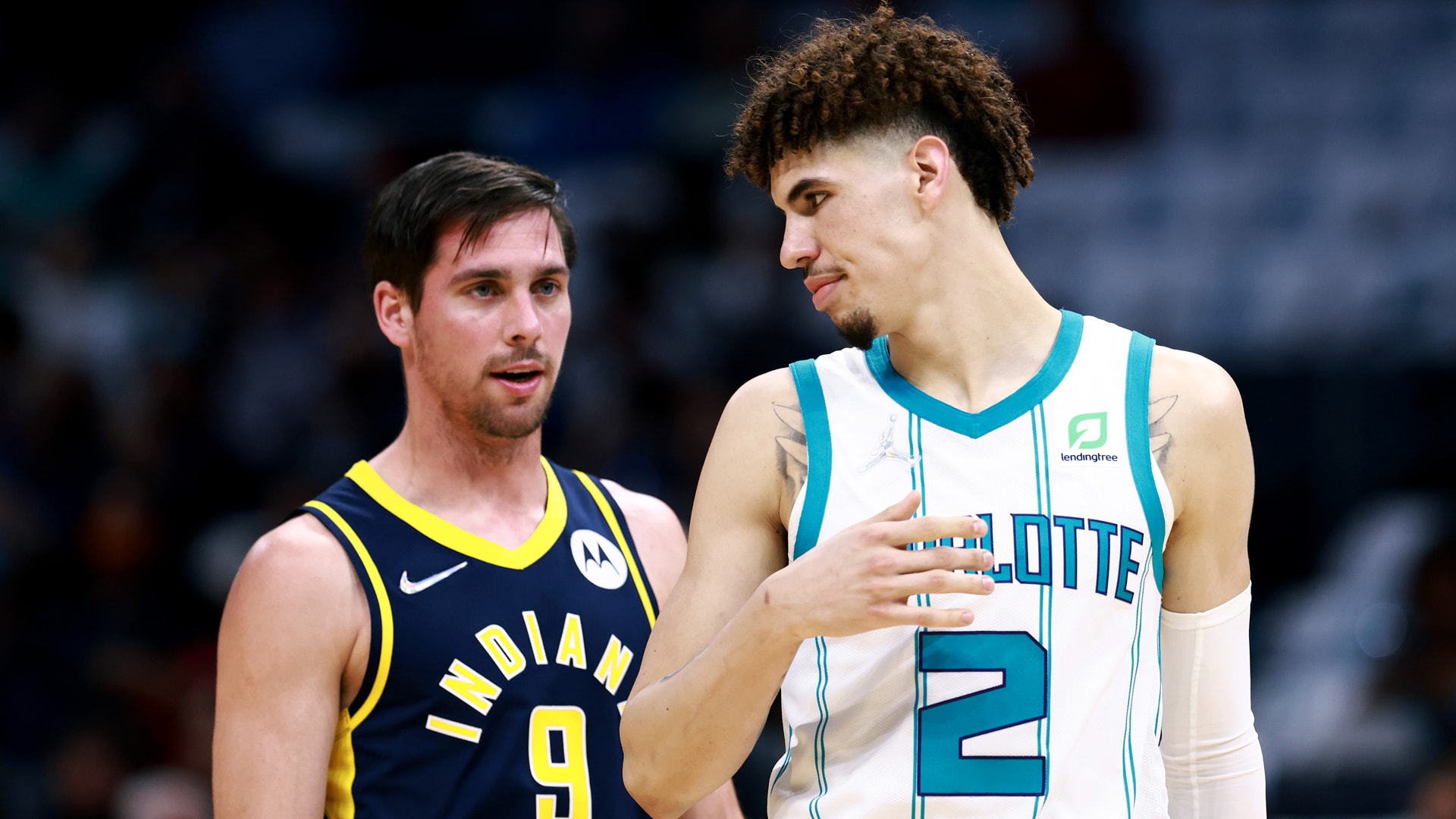 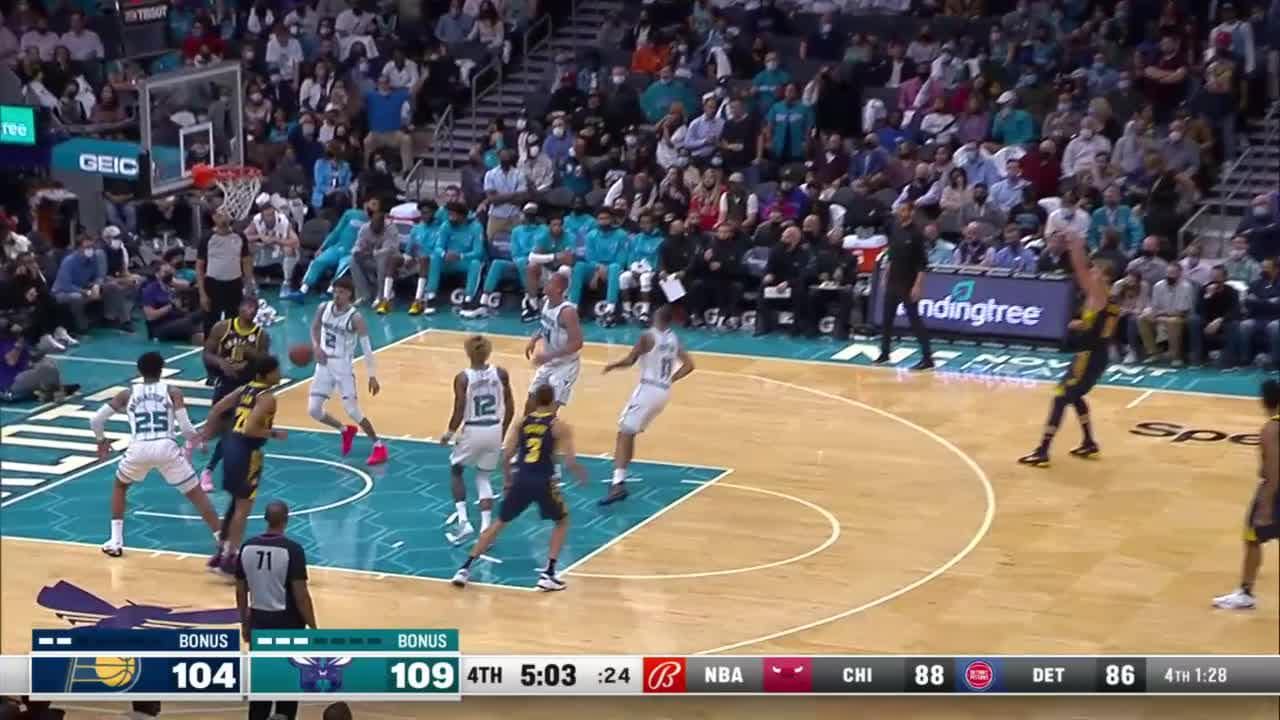 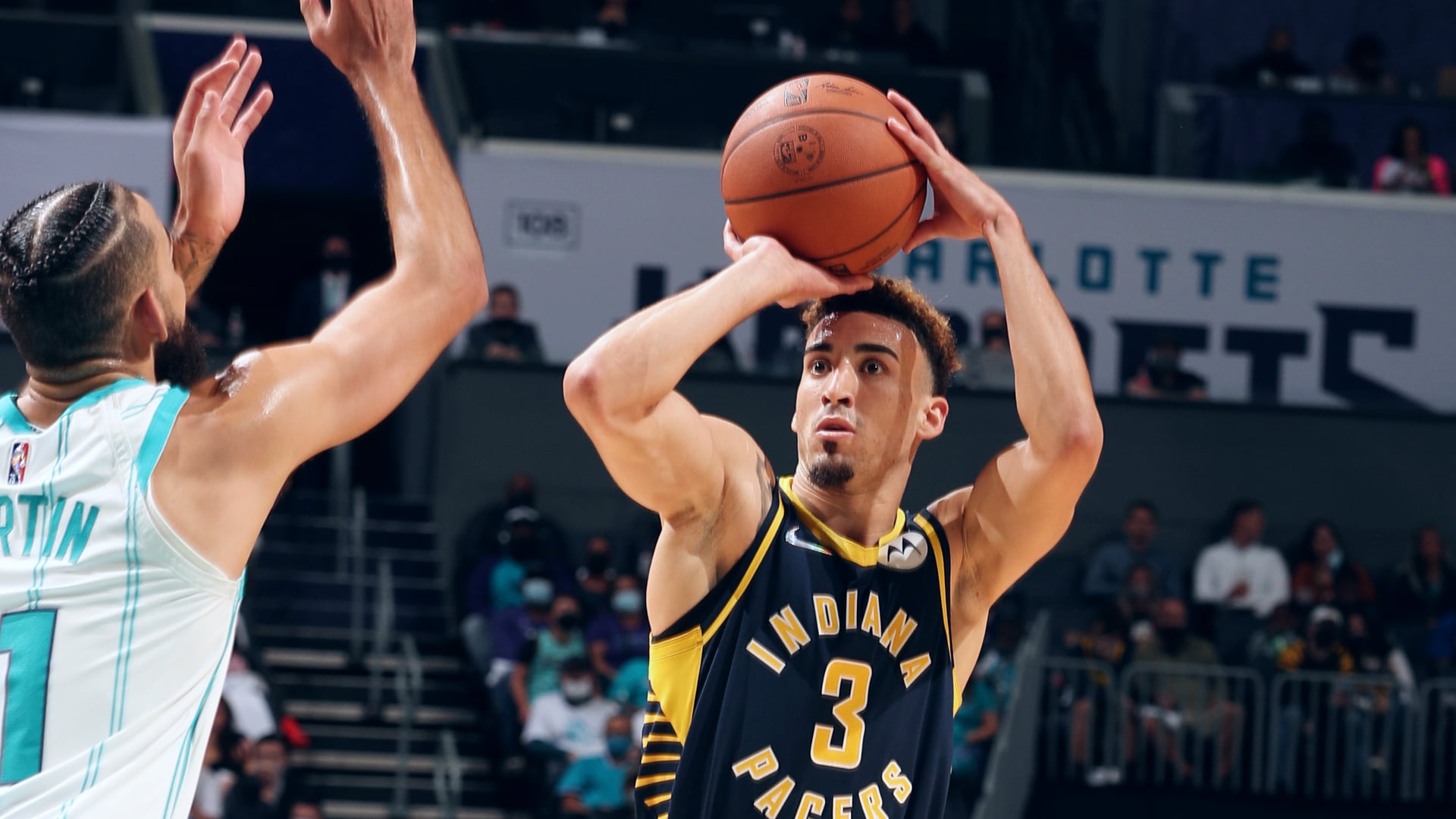 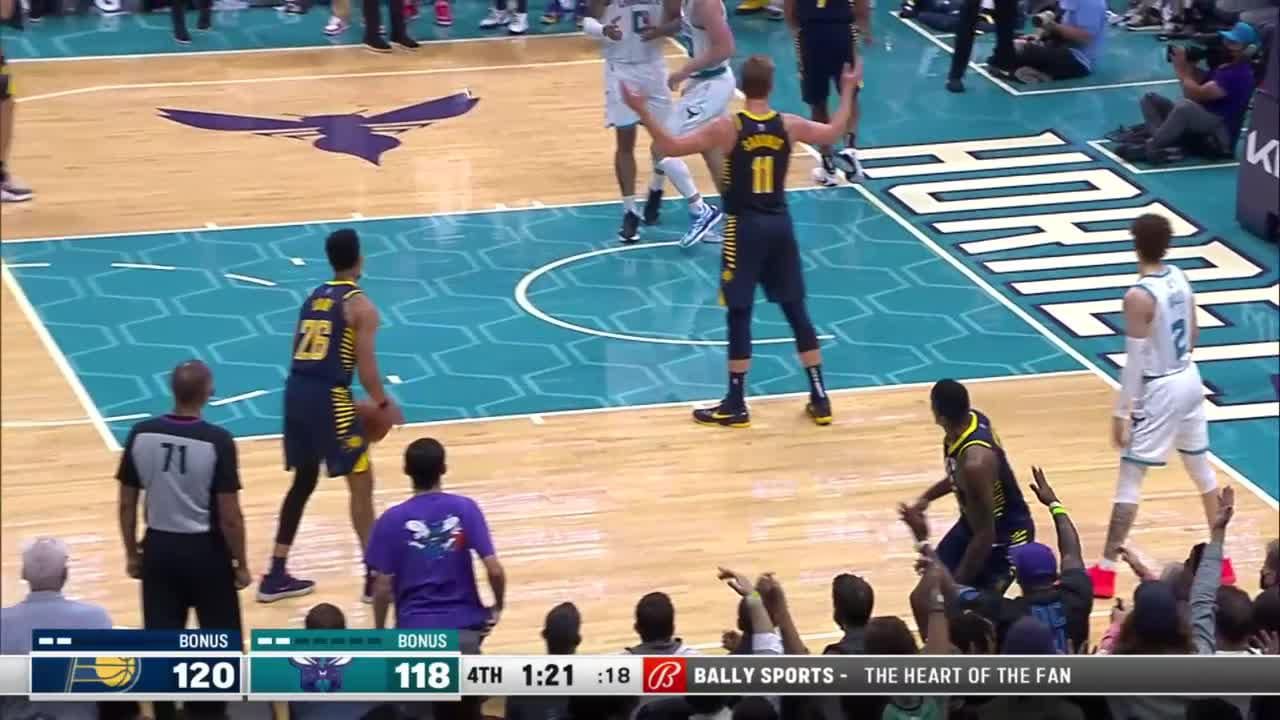 First Bucket of the Season

If the first game of the 2021-22 season is indicative of how the season will unfold, Pacers fans are in for a wild ride.

Indiana (0-1) built and then blew a big lead on Wednesday in Charlotte, rallied late to move back in front, then came up just short in a 123-122 thriller against the Hornets (1-0).

But in the end, it wasn't quite enough.

The Pacers led by 23 points, but gave it all up in a disastrous third quarter and found themselves down 10 midway through the fourth quarter.

Indiana then charged back with a 14-3 run, taking the lead again on Brogdon's step-back three with 4:33 remaining. Charlotte moved back in front on a pair of Gordon Hayward free throws, but Duarte answered with a three on the other end.

Hayward tied the game at 113 with a jumper on the other end before Duarte buried another trey to put the visitors briefly back in front. Hayward, however, answered by banking in a deep three 20 seconds later to tie the game once again.

Sabonis made one of two free throws to put the Pacers in front with 1:51 to play. Hayward's jumper gave the Hornets the lead 14 seconds later, only for Brogdon to bury a three to make it 120-118 Indiana with 1:27 remaining.

Hayward drew a foul on the other end and hit one of two foul shots. Jeremy Lamb missed a good look from beyond the arc on the other end and then Hornets forward Miles Bridges converted a tough layup against Sabonis' contest to give the hosts a one-point lead with 51.2 seconds to play.

Out of a timeout, Brogdon had a good look for another go-ahead 3-pointer, but this time he missed. Hayward missed on the other end, however, and after a frantic scramble, Torrey Craig corralled the rebound and was fouled by Bridges.

Indiana was in the bonus, sending Craig to the line for the first time as a Pacer with 12.4 seconds remaining. The five-year veteran calmly sank both foul shots to give the Pacers the lead.

After a timeout, Hayward drove and missed, but the Pacers couldn't come up with the rebound. After another scramble, Hornets forward PJ Washington came up with the balll and drew a foul on Craig with 4.6 seconds to play. Washington also hit both foul shots to put Charlotte back in front.

On the other end, the Pacers put the ball in their All-Star's hands, allowing Sabonis to post up on the left block against Washington. The lefty couldn't get the fadeaway shot to drop however, as the Pacers came up just short.

The Pacers made a strong opening statement on both ends of the floor. Sabonis scored a pair of early buckets, Myles Turner blocked two shots in as many minutes to tip off his Defensive Player of the Year campaign, and Duarte knocked down the first shot of his career as the Blue & Gold jumped out to a quick 6-0 lead.

Sabonis kept rolling offensively. He scored eight of Indiana's first 10 points, 12 of their first 19, and 14 of their first 23. The 6-11 Lithuanian converted his first six attempts and two free throws, with his final basket capping a 15-6 Pacers run to open up a nine-point lead seven minutes into the season.

The Pacers remained in front for the rest of the opening frame. Duarte finished the first quarter of his NBA debut with a flourish, hitting back-to-back 3-pointers — the second one at the buzzer — to cap an 11-point quarter and give Indiana a 38-25 lead.

"Chris Duarte had a really terrific game," Carlisle said. "He did what we needed him to do and that is be a threat to score. He was solid on defense on a lot of possessions...For a first night as a rookie in the NBA, it was an outstanding effort."

LaMelo Ball drained consecutive threes to open the second quarter and pull the Hornets back within five, forcing a quick timeout from Carlisle. But Sabonis quickly righted the ship, draining two triples of his own and adding a layup for good measure, an eight-point flurry in a 68-second span.

Duarte had another impressive spurt minutes later, draining a contested three in front of the Pacers bench at 6:15, then adding a fastbreak layup 55 seconds later to push Indiana's lead to 57-40. The rookie headed to the locker room with head trainer Josh Corbeil after tweaking his ankle shortly thereafter, but returned to watch the end of the half on the bench.

Even without Duarte, the Pacers maintained a double-digit advantage all the way up to halftime, taking a 75-59 lead into the intermission.

Duarte started the second half and the Blue & Gold picked up where they left off. Turner and Brogdon converted layups and then Duarte drained his fourth 3-pointer of the night to push the lead to 23.

The Hornets charged back, however. Ball scored 12 points during a 28-2 run as Charlotte improbably retook the lead. The hosts reeled off 24 unanswered points to cap that sequence, taking the lead on Kelly Oubre Jr.'s 3-pointer with 3:07 remaining in the third quarter.

The Pacers went without a point for over six minutes of game time, from Sabonis' hook shot at the 8:48 mark to T.J. McConnell's drought-ending layup at 2:30.

Indiana briefly tied the game at 88 on Justin Holiday's jumper with 1:45 left in the frame, but the Hornets scored the final four points of the quarter to take a stunning lead into the fourth.

"The building had been pretty dead in the first half," Carlisle said. "A lot of that was we were playing well. But they got going a little bit, the energy in the building got going, and when that happens, crazy things happen in this league."

The Pacers failed to cut into the lead over the first several minutes of the final frame and Charlotte actually pushed its lead to 10 on Ish Smith's jumper with 7:09 to play.

That's when the Blue & Gold finally made their run. Sabonis scored five straight points and then Brogdon converted a three-point play to trim the deficit to 106-104 with 5:44 remaining.

On the other end, Ball confidently rose up from 30 feet and buried his seventh three of the night to push the lead back to five. But Sabonis answered with his fourth trey. Then after Ball missed a layup, Brogdon got Hornets center Mason Plumlee switched onto him and took advantage, stepping back and draining a go-ahead triple with 4:33 to play.

Sabonis finished the night 13-for-19 from the field and 4-for-6 from 3-point range. Duarte was also impressive beyond the arc, going 6-for-9 from long distance.

"It was crazy," Duarte said of his NBA debut. "I've never played in front of a crowd like that. But I felt great. That's what I worked for, for moments like that. I'm ready."

Ball led the Hornets with 31 points, nine rebounds, and seven assists, going 7-for-9 from 3-point range. Hayward added 27 points, including 10 straight down the stretch in the fourth quarter.

The Pacers will look to bounce back quickly as they head to Washington on Friday, then return to Indiana to host the Miami Heat on Saturday in the first regular season game at the newly renovated Gainbridge Fieldhouse.

Sabonis came up three points shy of matching his career high and did match his career mark for 3-pointers made, knocking down four treys for the fourth time in his career, but the first time with Indiana. Each of the previous three games in which Sabonis made four 3-pointers came during his rookie season with Oklahoma City in 2016-17.

Brogdon scored 13 of his 28 points in the fourth quarter and collected his 16th double-double as a Pacer and the 19th of his career on Wednesday.

The NBA's leading shotblocker in 2020-21, Turner swatted four more shots on Wednesday to continue an impressive streak. The 6-11 big man has blocked at least three shots in the season opener in six straight seasons.

The Hornets scored 22 points off 17 Pacers turnovers, while Indiana managed to score just eight points off of eight Charlotte giveaways.

Charlotte outscored the Pacers 33-13 in the third quarter as the Blue & Gold went 6-for-20 from the field and 1-for-11 from 3-point range in the frame with six turnovers.

You Can Quote Me On That

"They got aggressive. We didn't do a good job. We turned it over, we became a little tentative. That can't happen." -Carlisle on what went wrong in the third quarter

"We're a team that feeds off our defensive presence and energy and when that's not there, offensively we're not going to be as locked in as well. I think that's what you saw tonight, especially in the third quarter. We missed shots and it affected our defense and vice versa." -Brodgon

"I feel like maybe we kind of went away from that, just got caught up in the game. It's something that I've got to be more vocal and get the guys looking at me. Something that's working, we've got to keep going at it." -Sabonis on not getting as many post touches in the second half

"He's been big all preseason. He's fearless. He goes out there...he knows how to play. He's poised. He's going to be a problem." -Sabonis on Duarte's debut

Stat of the Night

Duarte, the first Pacers rookie to start his first game since Jamaal Tinsley in 2001, shattered the franchise record for most points by a rookie in their NBA debut. Duarte's 27 points were 10 more than the previous mark, set by Chuck Person on Oct. 31, 1986.

Indiana heads to Washington to take on Bradley Beal and the Wizards on Friday, Oct. 22 at 7:00 PM ET.

The Pacers host Jimmy Butler and the Miami Heat for Opening Night presented by Gainbridge on Saturday, Oct. 23 at 7:00 PM ET. Secure your seats today and help fill Gainbridge Fieldhouse to cheer on your Pacers. Find Tickets »