The Knicks defeated the Pacers, 110-107. Julius Randle led the way for the Knicks with 28 points, 10 rebounds, six assists and a career-high tying four steals, while Derrick Rose added 17 points, a se
Tweet 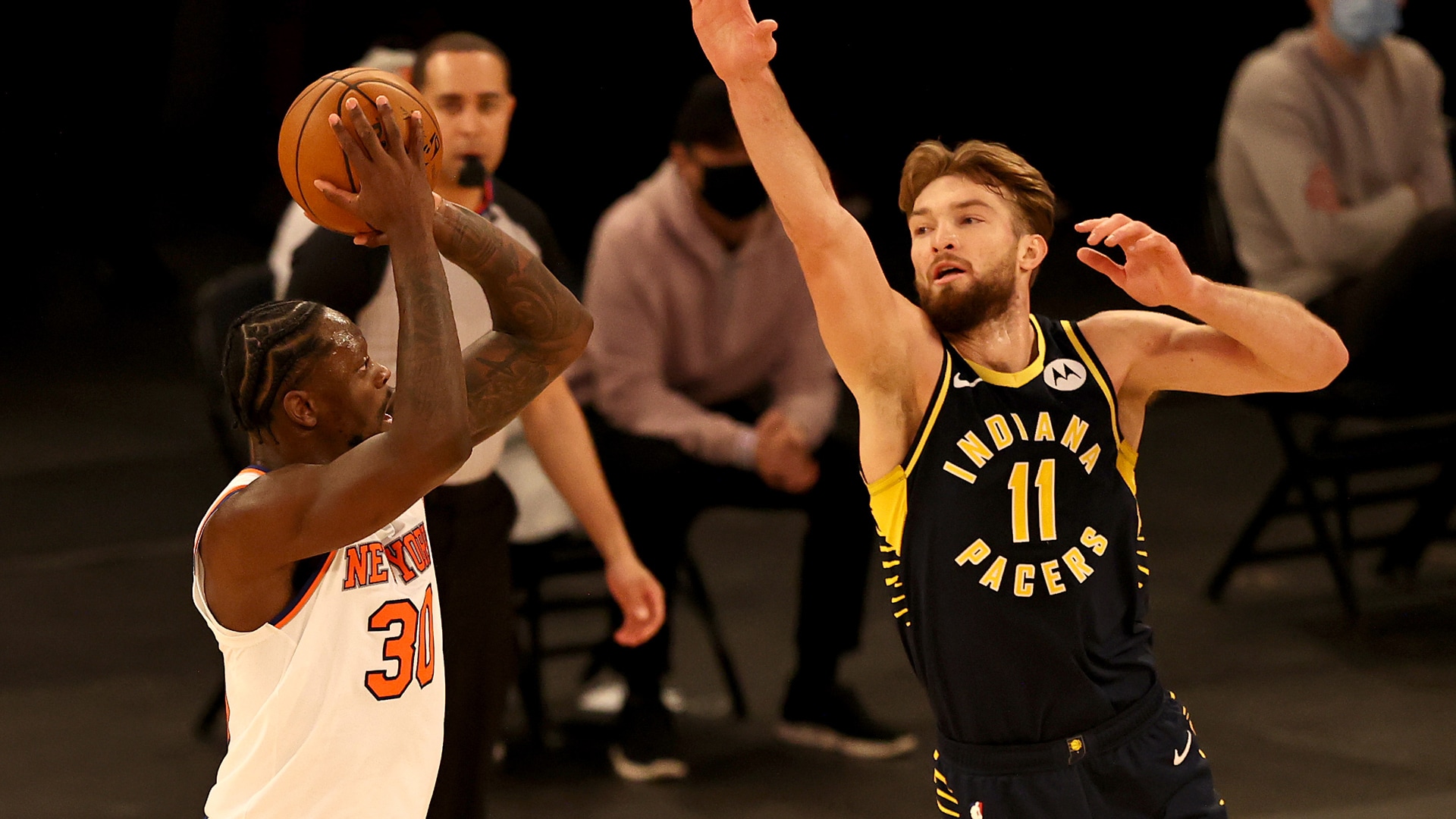 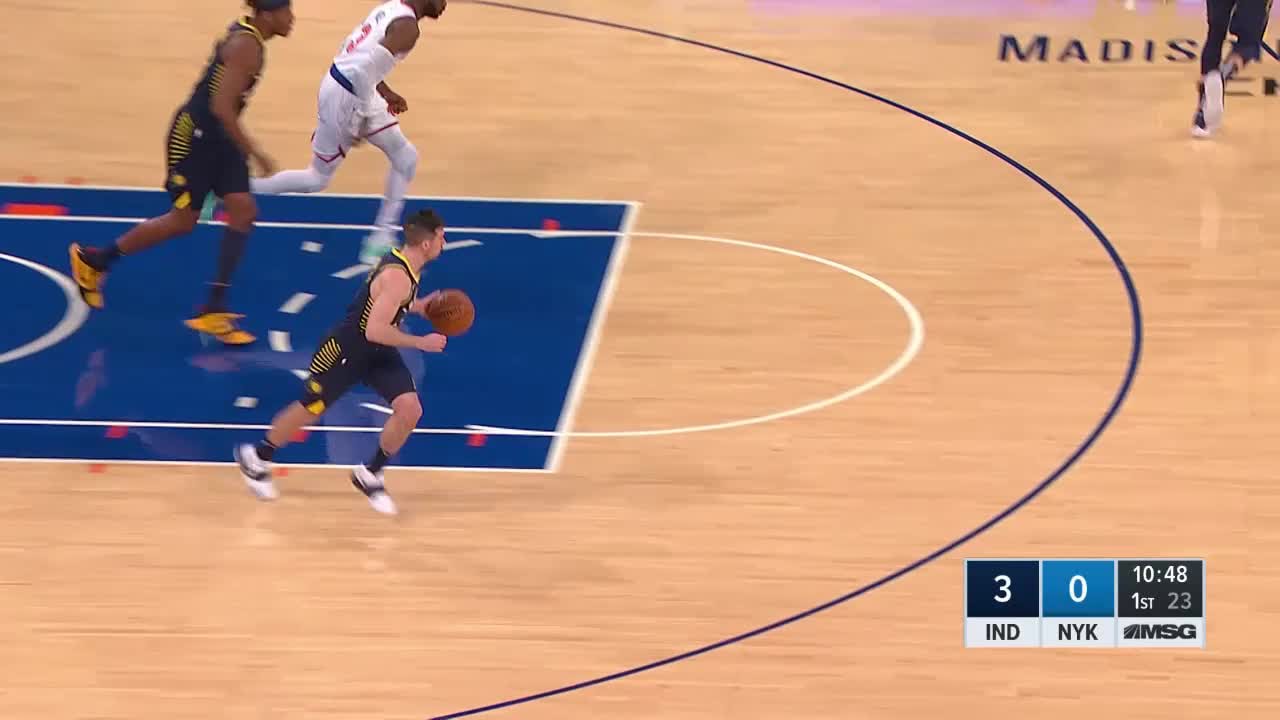 Chase Down Block by Turner For the third straight game, the Pacers were right there in the final minutes with a chance to win, but came up a play or two short.

Indiana led by as many as 16 in the first half on Saturday night in New York and rallied from a nine-point deficit in the fourth quarter to take the lead, but could not hang on down the stretch. In the end, the Pacers (15-17) fell to the Knicks (17-17) on the second night of a back-to-back.

It was the third straight loss and the ninth in the last 13 games for the Blue & Gold. New York, on the other hand, has won five of its last eight contests.

The Pacers led 98-93 with four minutes remaining, but the Knicks responded with an 11-0 run to take the lead. RJ Barrett knocked down a 3-pointer and converted a three-point play to put New York back in front. Then after a timeout, Julius Randle hit a three and Barrett made a layup to extend the Knicks' lead to 104-98.

T.J. McConnell ended the Pacers' drought on a layup with 2:13 remaining, then found Edmond Sumner for an open three 25 seconds later to trim the deficit to one.

Two Nerlens Noel free throws with 1:16 to play made it a three-point game. On the other end, Myles Turner had an open look from the right corner to tie the game, but couldn't get the shot to fall.

Domantas Sabonis was then whistled for a foul on Randle on the other end and the All-Star forward made both foul shots with 29.7 seconds left.

Out of a timeout, the Blue & Gold got a quick look for Sabonis, who banked in a 3-pointer to make it a two-point game with 25 seconds remaining. The Pacers then fouled Barrett, who missed both free throws with 14.9 seconds left.

But the Blue & Gold never got a shot off, as Sabonis and McConnell botched a handoff, allowing Derrick Rose to deflect it and Frank Ntilikina to corral the loose ball. Ntilikina then sealed the game with two foul shots with 2.9 seconds left.

"Plain and simple, that's on me," McConnell said. "Coach (Nate Bjorkgren) drew up a great play for me if there wasn't the backdoor (look) to come off Domas' (dribble handoff). I just completely turned my head. That one's 1,000 percent on me."

With the win, the Knicks took the season series against Indiana for the first time since 2016-17. The Pacers beat New York in the season opener on Dec. 23, but the Knicks won at Bankers Life Fieldhouse on Jan. 2.

All five starters scored in double figures in Saturday's loss for Indiana. Doug McDermott had a team-high 20 points, while McConnell recorded a double-double with 17 points and 12 assists while also pulling down six rebounds.

The Pacers jumped out to an early 8-0 lead behind two threes by Justin Holiday and a dunk by Turner. The Blue & Gold remained in front for the entirety of the opening frame.

Holiday and McDermott scored eight points apiece in the first quarter. Indiana's reserves then checked in and combined for 10 unanswered points to open up a 13-point lead before four Knicks points to close the frame trimmed the Pacers' lead to 32-23 entering the second quarter.

The visitors extended the margin to 46-30 following an 11-3 run midway through the second quarter. But the Knicks roared back, as All-Star forward Randle scored six points and Barrett hit two threes as the Knicks reeled off a 21-6 run to make it a one-point game in the closing seconds of the first half.

Sabonis had the ball on the right block with under five seconds remaining and tried to fire a pass to the opposite corner, but Rose deflected it to Randle, who pushed the break and dished to Rose for a deep three at the buzzer that gave New York a stunning 54-52 lead at the intermission.

"Just some dumb turnovers that let them get some easy buckets in transition," McDermott said of the Knicks' run to close the first half. "I think we maybe settled a little bit. Earlier in the game we were really moving the ball and kicking it out and I thought maybe they were collapsing on us a little more and we weren't making the right reads there...We've got to play a certain style for 48 minutes. We can't get high on ourselves when we're up."

The Pacers regrouped at halftime and played well to open the third quarter. McDermott scored nine of Indiana's first 13 points in the frame, giving the Pacers the lead again with a 3-pointer with 7:28 remaining in the period.

Indiana led 67-64 before the Knicks scored seven straight to surge back ahead. They remained in front for the remainder of the third quarter. Randle scored 11 points in the frame as New York took an 81-78 lead into the fourth quarter.

The Knicks quickly added to their lead in the final frame thanks to a Noel dunk and a four-point play by rookie Immanuel Quickley.

The Pacers quickly rallied, however, reeling off nine unanswered points, capped by a Sumner slam off a lob from Aaron Holiday, to tie the game at 89 with 8:36 to play. Indiana then took a 94-91 lead when Turner hit a 3-pointer from the top of the arc with 6:37 remaining.

Turner's layup with 4:15 left extended the lead to 98-93, but Barrett answered with 3-pointer and a three-point play on the next two possessions to give the Knicks a lead they would not relinquish.

"The feeling is they want to win really bad, just like me," Bjorkgren said of the mood in Indiana's locker room after the latest loss. "They don't feel good. It doesn't feel good at all losing a basketball game...We played hard again. We just came up short. It will turn."

Randle led all scorers with 28 points on 12-of-22 shooting and also tallied 10 rebounds, six assists, and four steals. Barrett added 24 points and seven rebounds, while Rose finished with 17 points and 11 assists.

Sabonis finished with 15 points, seven rebounds, and nine assists in the loss. Justin Holiday scored 13 points, while Turner had 11 points and four blocks.

Starting point guard Malcolm Brogdon missed his first game of the season due to soreness in his right knee after colliding multiple times with opposing players during Friday's loss in Boston. McConnell started in his place.

The Pacers continue a four-game road trip in Philadelphia on Monday. They will finish the trip on Wednesday in Cleveland before returning home to host Denver on Thursday in their last game before the All-Star break.

McConnell recorded his first double-double of the season. He played a career-high 46 minutes and 20 seconds while making his second start of the season.

The Pacers forced a season-high 21 turnovers, which they converted into 24 points on the other end.

Sumner scored all nine of his points in the fourth quarter to help Indiana retake the lead heading into the final minutes.

Turner hit a big 3-pointer in the fourth quarter, but went just 1-for-8 from beyond the arc on the night. He finished the month of February 16-for-59 (27.1 percent) from 3-point range.

Barrett went 4-for-6 from three on Saturday and is now 11-for-14 from beyond the arc in three games against the Pacers this season. He is just 28-for-101 (27.7 percent) against the rest of the league.

You Can Quote Me On That

"Things were really going smooth there, but then we gave up (24) points in the last six minutes of the half. We played a little out of character there." -Bjorkgren on the turning point in the game

"We've just got to be better. We started the game off so well and we just can't sustain that for 48 minutes. I know it's not easy. We just can't get too down on ourselves when things aren't going our way." -McDermott

"I felt fine. Certainly when I play that many minutes I can't be picking up fullcourt every single play. But I picked my spots, when to be effective. Their guards are quick, they're very good and you exert a lot of energy guarding them." -McConnell on playing a career high in minutes

"I thought he did a good job of cutting on the weak side and flashing. He had a couple possessions that he played above the rim where T.J. found him. He also hit a big three. But the reason why I liked him in there was he was part of that group that was making that run to come back there in the fourth quarter and I really like his defense." -Bjorkgren on Sumner's strong play

Stat of the Night

The Knicks outscored the Pacers 24-6 over the final 6:12 of the first half to turn a 16-point deficit into a two-point halftime lead.

The Pacers continue their road trip on Monday, March 1 when they visit Philadelphia to take on Joel Embiid and the 76ers at 7:00 PM ET.

A limited number of tickets for all upcoming Pacers home games from January 24 through March 4 are now on sale. Single Game Tickets »   Health & Safety Guidelines »