“[Annelie] was named MVP in the bubble because she was doing everything,” Harris said in a recent interview. “She was doing so much for us, making sure we had things in our hotel that made it feel like home.”

Schmittel was everywhere in the bubble, literally and figuratively. She helped players develop their social justice initiatives, stocked players’ rooms with photos of friends and family, planned birthday dinners, and even rebounded at practice.

“That work didn’t go unnoticed for myself, or anybody on the team,” Harris said. “We all knew she was the MVP.”

“[Annelie] did an amazing job of making an uncomfortable experience one that we could enjoy, and actually get something out of,” Matisse Thybulle recalled. “We really appreciate Annelie here, for sure.”

Most of Schmittel’s work happens behind the scenes, serving as a source of support in the smaller moments in between those captured under the bright lights.

Schmittel’s mission is to help set her players up for success - on and off the court - from the beginnings to the ends of their careers and beyond.

As a former track and field athlete at Winona State, Schmittel cites her own transition out of high-level athletics as the driving force in her decision to pursue her current line of work.

“I found areas that I felt there were some shortcomings, in college athletics and in pros, as it relates to caring for athletes in times of transition,” Schmittel said. “When I identified that void in my life, and in athletics in general, I knew that was the space I wanted to be in to make a difference.”

With the Sixers, Schmittel aims to ease the strain, starting on Day One.

“My first experience with the Sixers was with Annelie,” said Thybulle, reflecting on June 20, 2019 - the night he was chosen by the Sixers with the 20th pick in that year's draft. “Draft night is like a crazy, hectic, whirlwind. It’s like a gauntlet of media and interviews.

“Through all of that, Annelie finds me, and she’s like this calming force and presence, helping me feel like I can breathe, during one of the most crazy, life-changing nights of my life,” Thybulle said.

“It’s nice he says that I was calm that night, because I’m not sure I actually was,” Schmittel said with a laugh. “It was more like a duck on water, peddling underneath, but trying to be calm for him.”

A selfless source of comfort, through and through.

Harris joined the Sixers via trade a few months earlier. Like Thybulle, his first Sixers experience was with Schmittel.

“I remember getting picked up from the airport, being in the car with [Annelie] and Boban,” Harris said. “Now, my whole family knows Annelie. It’s been a real pleasure to be associated with her within the Sixers organization.”

“As soon as I signed with the 76ers, [Annelie] was the first person to text me and call me,” Howard said. “She gave me everybody’s number, she told me who to talk to for everything. She’s been amazing from Day One.”

For Schmittel, that first conversation with a player is paramount.

“I make sure he has every single number of every single teammate of his, so they can start building their relationships,” Schmittel said. “That’s something we start right away.”

The relationships Schmittel encourages have grown since. She says Howard has been a blessing to those around him.

“[Dwight] has a calming presence. Having him as a mentor for somebody like Matisse, Ben, and Joel - been amazing to watch.” 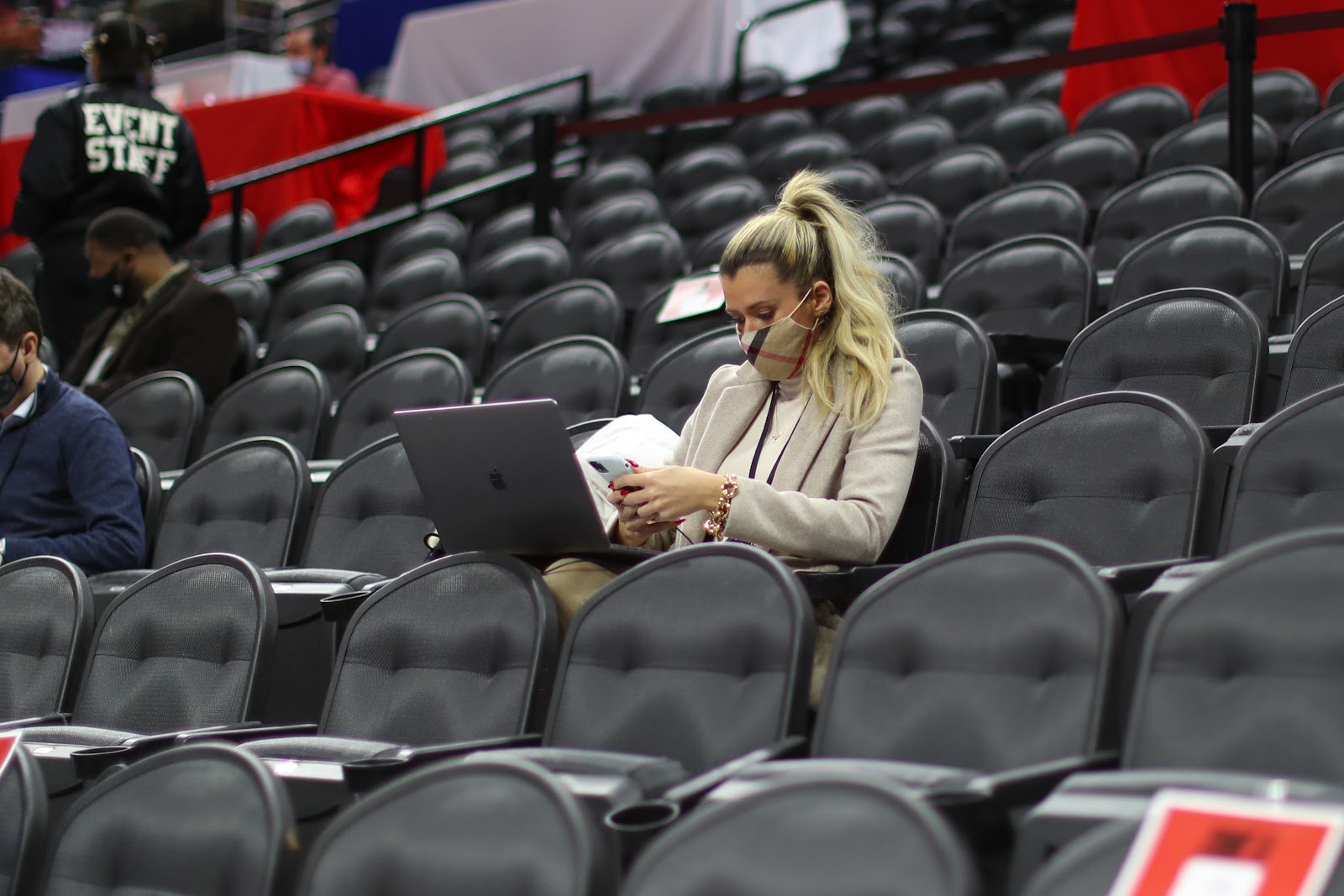 From day one, to year one, to year ten, and beyond, Schmittel prides herself in being a resource to her players, in any phase of their lives.

“Having someone who’s so high up in the ranks at the Sixers that can talk to you, help you through things, and be there as an aide, a friend, somebody who’s there to listen - has been huge,” Thybulle said.

Harris’ bond with Schmittel has grown since that first ride from the airport.

“We go on the floor, and we’re athletes, we’re role models, we’re celebrities. But once we get off that floor, we are people. We have feelings. We have emotions. Wins, losses, we’re humans. We’re real," Harris said.

Schmittel, who holds a PhD in sports communication focusing on crisis communication, spent three years working in player engagement with the Oakland Raiders prior to joining the Sixers.

When she came to Philadelphia in January 2019, Schmittel became the first woman to ever hold a Vice President title within 76ers basketball operations.

She remains one of few women VPs in NBA basketball operations, but she hopes that will change.

“I’m a firm believer that the sports world needs to mirror what’s happening in the outside world. The outside world is diverse. If you’re surrounding your players with just the same kind of people, you’re not helping them succeed.” 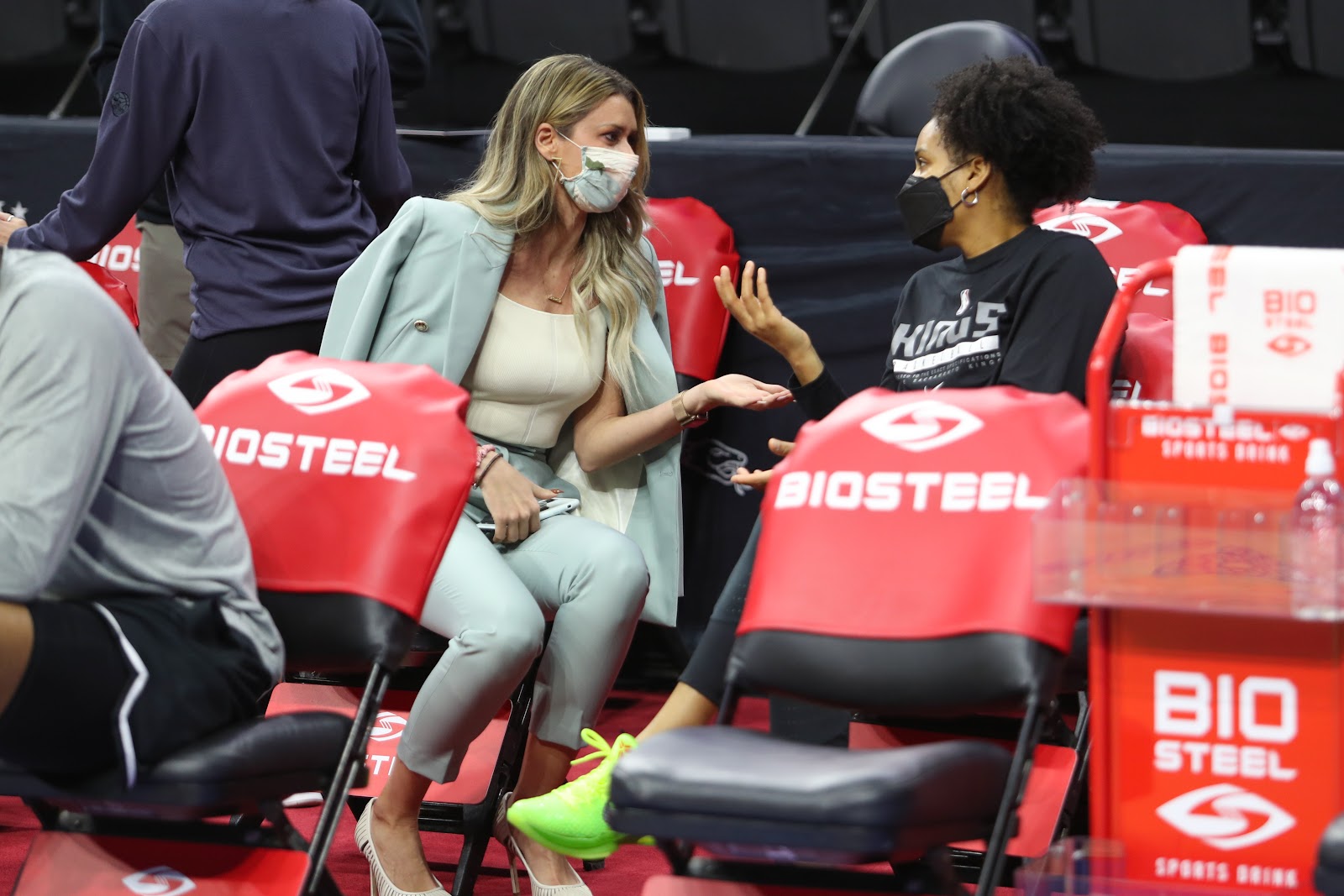 For Schmittel, diversifying a front office doesn’t just advance a staff. It helps the players they support.

“Having people of color, women, a diverse staff, is so important. It helps players see something they’d see on the outside, but it also helps in their growth. They’re able to carry conversations differently, they’re able to learn from other people’s experiences, and that’s ultimately what’s important.”

The value of perspective, and Schmittel’s background in crisis communication, became crucial when the team entered the bubble in July.

“There was so much going on in the world - pandemic, heightened social injustice issues, voting,” Schmittel remembers. “We went into this protected space that was Disney, and we didn’t want to lose reality.”

When it came to the Sixers’ social justice initiatives, Schmittel’s goal was to foster an environment that allowed players to speak freely among themselves, and to speak up if they chose to.

“The players wanted to make sure they were using the platform effectively. It was about creating a safe space, where everybody felt like, if I want to be part of the conversation, I can be.”

This season, Schmittel and the players still reference and reflect on their bubble talks.

“Those were some really in-depth, deep conversations, and those you carry forward,” Schmittel said. “They didn’t stop just because we stopped being in the bubble.”

Because of those human moments, Harris sees Schmittel’s role as key to his success. He also hopes to see more women like Schmittel in positions of power.

“Having people like Annelie in [important] positions - you’re having somebody who’s professional in the space, but also knows the balance between basketball and human, human and basketball,” Harris said.

“There’s a real balance there. It’s a hard thing to see on the eye test, but I think it’s a real thing. I don’t think that a man presents any better qualities than what a woman can bring to the table.”

“There’s a lot of masculine energy here. You’ve got guys on the team, the coaching staff - it’s a lot of men. And to have somebody like Annelie, who can bring everybody together, bring that love, and that warmth, that’s why it’s important.”

Schmittel hopes that in doing her job at a high level - authentically - she can widen the path for those following in her footsteps.

“I think all too often, women are told they have to be a certain way to be successful in a male dominated field, and it’s just not true.

“I think my ultimate hope for women in sports is that they realize they can get to these types of positions, that they can work in sports, without compromising themselves and who they are."

Due to the nature and profile of her role, Schmittel has developed a following and a network - men and women alike, many of whom she has never met - of those hoping to follow in her footsteps. New people reach out to her, mostly through LinkedIn, daily.

But sometimes, her players make the connections.

“The women who have worked with my college teams have reached out to me, because they want to contact Annelie, because she’s someone that they look up to,” Matisse Thybulle said.

“To be the middle-man of that is really cool. I get to work with her, and see how good she is at her job, and then also connect her with other women who are trying to get to that point - which they might not have seen as a possibility if it wasn’t for her being in that position already.”

And while she’s aware of the impact her position has on those who will follow, Schmittel finds professional joy in her players’ success.

Success, not just measured by statistics or championships, but by goals accomplished - from All-Star bids to graduations, from new contracts to new dads.

“I think the people that do this job never do it for the recognition or the accolades,” Schmittel says.

“You do this because you genuinely care, and you want to serve. For me, the ultimate compliment is when the guys are able to perform, and do their job, and do it well, and are growing.”