Doris Martel, the 76ers’ Manager of Manual and Functional Therapy, plays a variety of crucial roles in the Sixers’ lives.

Martel worked with the LA Clippers, then coached by Doc Rivers, for five seasons before she joined the Sixers during their 2018 playoff run.

When Rivers landed with the Sixers in the fall, he had a colleague and friend waiting on the East Coast.

“It was so nice when I took this job, knowing that Doris was there already,” Rivers said in a recent interview. “I’ve leaned on her this year probably way more than she’s leaned on me.”

A native of Paris, France, Martel boasts international experience too, as a supportive force behind the French national team.

While expecting her son Dorian four years ago, Martel worked with the Clippers throughout her pregnancy. Rivers, who she considers an uncle, gifted her the stroller she still uses with Dorian today.

Her impact on her players, colleagues, and countless others is a profound and lasting one.

Just take it from Rivers:

“When I had Doris in LA - I made a comment to our GM at the time: ‘For my life, if I can have her around, our team is better.’”

But Martel’s role extends far beyond physical therapy. She supports the players’ holistic success, in mind, body, and spirit.

If you think soft tissue or massage therapy for the 76ers' players is strictly comfort treatment, think again.

“She is small, but she is mighty," Matisse Thybulle said with a laugh. "She inflicts a lot of pain on us.”.

Thybulle, however, is quick to point out that with the pain comes comfort.

“That type of work is very intimate, and it opens up a space for you to have, like, therapy sessions, where you can talk about things you don’t normally get a chance to talk about.”

The Sixers appreciate Martel, who stands at 5-foot-5, for her sharp ability to treat the human body while also using a gentle touch to comfort the human mind.

Tobias Harris also overlapped with Martel during his time with the Clippers. They reunited in Philadelphia in 2019.

“Doris always does an amazing job of keeping me healthy - not only physically, but also mentally,” Harris said. “Making sure that I’m in the right headspace, day in and day out.”

“Doris is amazing,” Dwight Howard said. “She has this energy about her. The way she carries herself, she’s always upbeat, she just has this very beautiful spirit about her.”

“[Doris] has that mother-type feel,” Harris said. “She’s making sure you’re good [mentally] first, and allowing that to make sure your body’s good too.”

“I don’t know enough about [playing] basketball to help them be better players, but I know their body really well,” Martel says. “So I know what to tell them so that they can take care of themselves, for them to perform better on the floor.”

Martel relishes the chance to work with players from the earliest days of their careers, sticking with them through highs and lows, injuries and health. She’s worked closely with Thybulle since his entry into the NBA in June 2019.

“I love starting right away with rookies, because I can see them change to being men,” Martel said. “When [Matisse] arrived, he was like this little lost deer - timid, a little bit introverted. I wanted to make sure that he felt that he could trust people, and trust us.”

Since then, Thybulle has worked his way into significant roles in his two NBA seasons under two different coaches. 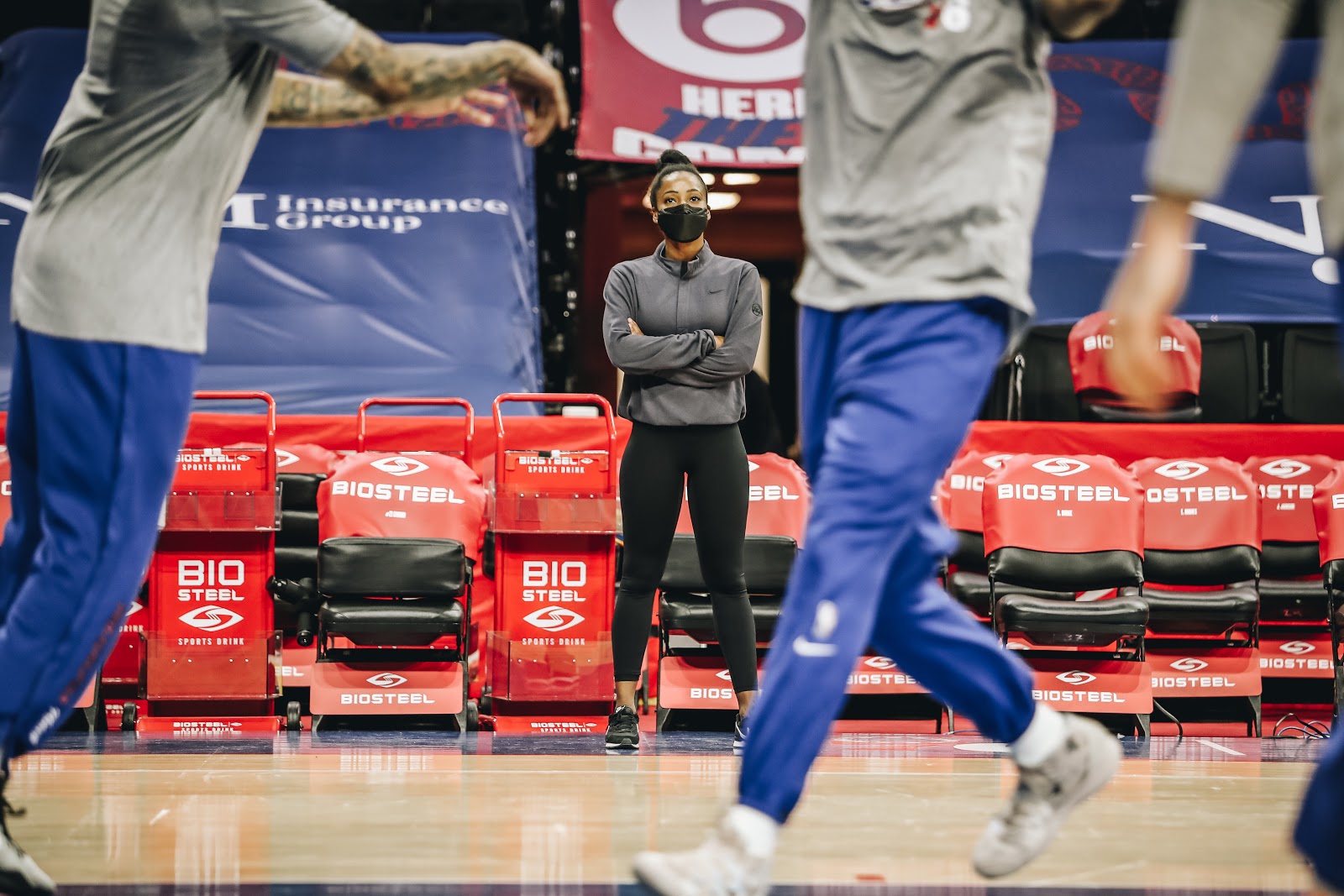 She also welcomes the challenge of treating a veteran player like Dwight Howard, who has passed through the hands of multiple therapists throughout his 16 years in the league.

“[Doris] has amazing touch,” Howard said. “She’s worked on every one of the players on the team. She’s awesome.”

The appreciation is mutual.

“Working with Dwight, I’m working with somebody who already has a lot of knowledge,” Martel said. “It’s actually more challenging to work with the vets than with a rookie. The fact that he respects my work, and that he likes my work - it’s very, very touching.”

As she does with all her players, Martel takes an individualized approach to treating Howard.

“I know that he’s been on several teams, he’s been through so many hands, he’s had so many people, so much advice. When I work with a veteran, I always try to see, ‘What do you know about your body? What do you think that you need?’ I gauge, ‘What influence can I have on you that you maybe don’t know? And what can I continue to do that was working for you in the past?’”

On Dwight Howard's first day at the 76ers Training Complex, he shared a ritual with Martel.

“When I first got here, I was talking about wanting to sage, and raise the vibration of the team, and of the facility,” Howard remembers.

“Doris was on point - she had her sage, she was ready to go, incense and everything. I was like, ‘Wow, we’re on the same page.’”

With Matisse Thybulle, Martel has helped nurture his spirit through confidence, personal growth, and problem-solving.

“Honestly, [Doris has] helped me a lot in just having tough conversations,” Thybulle said. “She’s been someone who’s empowered me.

“Doris has put a lot of pressure on me, being a young player, not to be afraid [to speak up]. It’s not comfortable, and most of the time it sucks, but every time I’ve done it, I always feel better, and good things come of it.”

While basketball operations and athlete care remain male-dominated fields, Martel knows her place is both earned and essential.

“[Women in our organization] bring a real role that is needed, in terms of balance,” Harris said. “There’s an automatic respect level there as well.”

“Having both men and women has an advantage,” Martel said. “We bring different qualities to the table.”

Qualities that are valued:

“To have somebody like Doris, who’s there to listen… is huge,” Thybulle said. “She’s also a mother, and she has so many motherly qualities that I know all of us need when we’re on the road, or just trying to get through the stress of being an NBA player.”

Martel verifies the maternal bond. She even gets her ‘sons’ mixed up every now and then, admitting that she'll inadvertently call 24-year old Matisse by the name of her three-year old toddler.

Martel feels that the maternal bond she shares with her players can make their stressful lives more comfortable.

“Being able to have both worlds, to help our players, I think it is very powerful.”

Martel’s presence is powerful in more ways than one. She’s leaving a mark on the people she works with, and those who look up to her.

“It’s about representation too, because in this world, not only am I a woman, but I’m Black," said Martel. "That’s really important representation to show those girls that you can do it too. Because we’re women, it’s going to be more difficult, but we have the shoulders to do it.”

“It’s a pleasure to work with all of them in this space, and to be able to see this organization, and the league, move more into accepting women into this space,” Harris said. “It should have been done years ago, but here we are. Better late than never, in my opinion.”

With almost a decade of full-time NBA experience in tow, Martel has mastered the art of balancing her many roles: 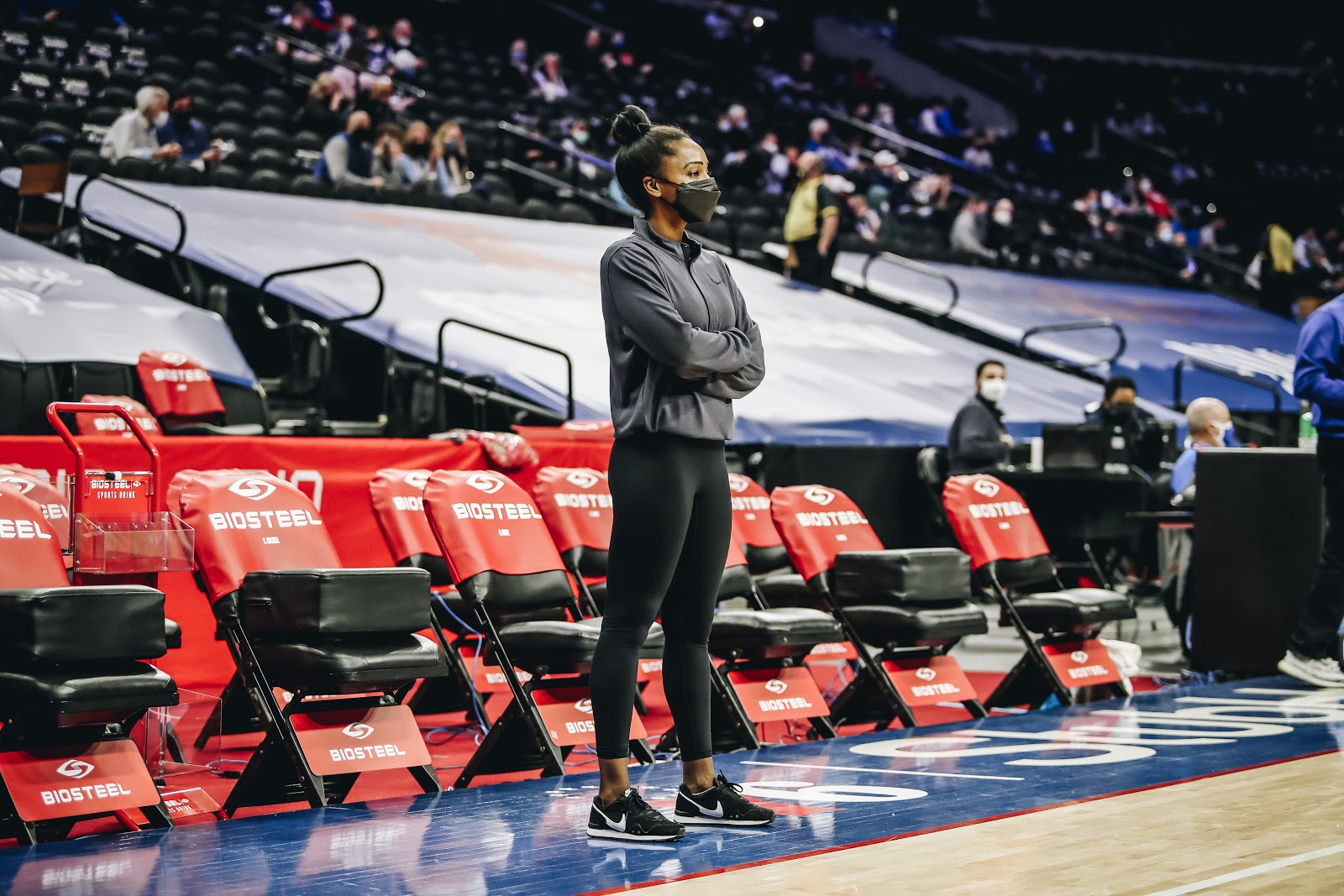